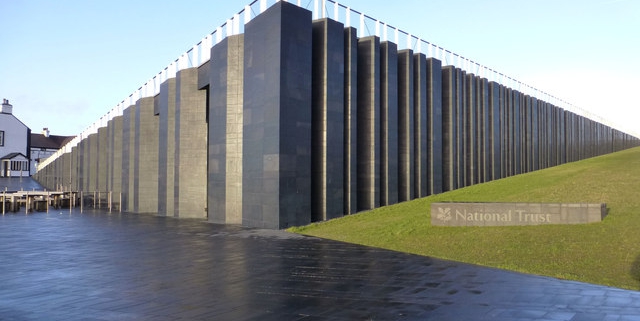 The Giant’s Causeway in Northern Ireland is already one of the largest tourist attractions in the country. Every year thousands of people flock to the World Heritage Site because of its history and its sheer glory. The causeway was crafted sixty million years ago by basalt lava and features 40,000 columns that gradually lead from the cliff down to the edge of the sea. Despite its popularity, for many years the site was not marked by much in the way of facilities. However, that has changed now that the new visitor’s centre is officially open.

In 2005, Heneghan Peng Architects won a competition that awarded them the honour of designing the Visitors’ Centre for the attraction. The new Giant’s Causeway Visitors’ Centre was to include toilets, a café, exhibition spaces, and a gift shop. Today it certainly offers visitors all of this, but it does so in a breath-taking way that is almost as impressive as the Giant’s Causeway itself.

The aim of the architects was to create a visitor’s centre that was both sympathetic to the surroundings and noticeable at the same time. They did this by creating a sloping structure that has two folds across the green grass. The first fold moves upwards to form a building that, uniquely, slides right into the landscape due to its sloping grass roof, while the second fold creates a car park with a neat angle that allows the upcoming road to meet it. The end result is that from the cliff side you can hardly see it, but from the land side it is easily recognisable.

The café offers a grand view of the coastline as it is situated near the far end of the building, and glass windows line each of the stone mullions that make up the design. Visitors can also venture out onto the grassy roof if they like and take an ariel view of the exhibition spaces via skylights. This point of view simply adds to the mystique of the building.

The floors are gently staggered inside the building to make full use of the sloping building shape. From the interior you can hardly tell that you are descending due to the slight steps here and there, from exhibition space to exhibition space. However, to make the building more accommodating, there are ramps which help to expose the downward slope. Either way, it is still very visually appealing and is almost an exercise in optical illusions.

After passing through the exhibition spaces visitors will find themselves at an access road that will lead them out to see the Giant’s Causeway in person. This allows them to take in the history of the region, and then to enjoy the stunning sight of the stones. The design of the visitor’s centre almost makes it a sight worth seeing in itself, which is just another reason to consider heading out to the Giant’s Causeway for those who have not seen it yet.

The History of Dunluce Castle

Visiting Belfast? Here Are Some Things You Must Do In The City
Scroll to top